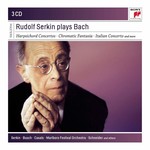 Rudolf Serkin is rightly revered for his powerful interpretations of the Austro-German Classical and Romantic piano repertoire, but he was also an outstanding Bach player. In the 1920s he began a decades-long partnership with the great German violinist-conductor Adolf Busch (his future father-in-law) that led to, among countless treasures, a classic set of the Brandenburg Concertos, recorded in London in 1935, and many performances of the Bach Violin Sonatas, including a live recording of No. 3 in E major, BWV 1016, made in Washington in 1943. That performance is now being reissued in a new Sony Classical release containing all of Serkins Bach for American Columbia.

The new collection contains another famous recording of the Brandenburgs featuring Rudolf Serkins magnificent continuo playing on piano (and his son Peter playing harpsichord continuo in No. 6), made in 1965 at the Marlboro Festival in Vermont (founded by Adolf Busch), led by Alexander Schneider and conducted by Pablo Casals. There are also performances of Bachs two Concertos for 3 Keyboards that Serkin recorded at Marlboro and Casalss Prades Festival with pianist-colleagues Mieczyslaw Horszowski, Peter Serkin and Ruth Laredo; Serkin père playing solo works including the Chromatic Fantasy and Italian Concerto; and the 14 canons based on the Aria from the Goldberg Variations that was discovered in 1974 in Bachs own copy of the printed works, with Serkins concentrated, reflective, crystal-clear, and beautifully balanced performance (Andrew Porter, writing in High Fidelity) of the Aria.