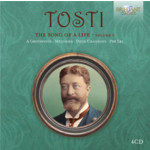 Based on 33 years of scholarship and promotion by the Istituto Nazionale Tostiano and a lifetime of studies on the part of Francesco Sanvitale, this volume lives up to its predecessors in bringing to wider attention the work of a born songsmith, at home in the English and French tongues as well as his native Italian, and one who brought the genre of salon song to a peak of perfection.

No one, not even the most dedicated Tosti singers such as Gigli and Caruso, had ever addressed Tosti's oeuvre with anything near a comprehensive approach. Yet the chronological approach to his work taken by this project proves that he was certainly not confined within the limited universe of love requited, rejected, desired, misunderstood, suffered or unspoken. The songs in this third volume cover the last decade of the 19th century, by which time Tosti had settled in London, been appointed singing teacher to the royal family and to a professorship at the Royal Academy of Music.

Despite their relative youth, the singers chosen to record this project are all Tosti experts, having won various editions of Ortona's international voice competition devoted to the interpretation of drawingroom songs and ballads. Other actors of lesser skill almost always seem to be portraying the same person. Much the same thing can happen with music, but not here, thanks to the light, graceful and lively address of the singers to the wide range of poets set by Tosti, including Victor Hugo, Jules Barbier, Alfred de Musset and Frederic Weatherly as well as less-familiar lyricists such as Barry Cornwall and Ada Negri.

The booklet (in English and Italian) includes a full contextual introduction to Tosti in his time, and sung texts are available at brilliantclassics.com.