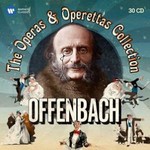 He was born in Cologne, but it was in Paris that Jacques Offenbach achieved fame. A special feature of this 30-CD collection are star-studded recordings in both French and German of his most celebrated operettas - works that overflow with joie de vivre and satirical wit - and of Les Contes d'Hoffmann, an opera that daringly fuses fantasy, comedy and tragedy. It also includes irresistibly stylish performances of such tempting rarities as Les Brigands, Pomme d'Api, Monsieur Choufleuri and Mesdames de la Halle.

" you are offered well-paced, well-sung and well-tempered performances of great vocal beauty and great seriousness - even when such seriousness is not needed, at all." Operetta Research Centre [Pariser Leben]

"Régine Crespin gives a masterclass in singing Offenbach. And Laina Vanzo as her partner, Piquilo, is pretty good too." BBC Music [La Pericole]

"Each [Fischer Dieskau and Jerusalem] combines a voice of rare beauty with convincing vocal acting. The result is certainly very different from what can be achieved with the French text. The humorous aspects of the opera scarcely register but it does mean that there is a real sense of a dramatic whole." MusicWeb [Hoffmanns Erzahlungen]

"These are particularly splendid examples of the idiomatic performance of Offenbach. Each is sung very much in character, with the manner of performance directed by the context of the item and by the words." MusicWeb [Jane Rhodes Operetta arias]

"Best known in the Anglo-Saxon world as godfather to The Pirates of Penzance, there is still much to be said for Les Brigands. And John Eliot Gardiner says it all with his customary conviction in this 1988 recording of the three-Act version." BBC Music [Les Brigands]