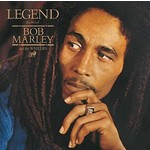 The 35th anniversary of Bob Marley & The Wailers' Legend is a double 180-gram vinyl reissue. Initially released on May 8, 1984, Legend holds the distinction of being the world's best-selling reggae album of all time with over 15 million copies sold in the United States alone, and over 28 million worldwide. This vinyl-only 35th anniversary reissue comprises the original "BMW1" version of Legend with the addition of two original U.K.-only cassette bonus tracks ("Easy Skanking" and "Punky Reggae Party").

SIDE A:
Is This Love
No Woman No Cry
Could You Be Loved

SIDE B:
Three Little Birds
Buffalo Soldier
Get Up Stand Up
Stir It Up
Easy Skanking

SIDE C:
One Love / People Get Ready
I Shot The Sheriff
Waiting In Vain
Redemption Song