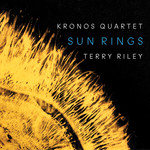 Kronos Quartet's groundbreaking 2002 collaboration with composer Terry Riley, Sun Rings, is available in full for the first time. Riley incorporates into his composition "space sounds" (plasma waves) that NASA had collected from the Voyager probes, as well as a choir that represents, in his words, "the voice of humanity in its struggle to understand the meaning of our place in this unfathomable universe." Musical America calls it "a spaceship that faces ahead into the planets but also looks back toward its starting point on Earth."