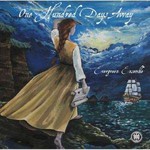 What did the early Australian colony sound like? Apart from 'Bound for Botany Bay', it's not a question we ask ourselves very often. But it's a question that Shane Lestideau has set about trying to answer.

Having just completed a master's degree on music in eighteenth-century Scotland, Shane was curious to know how much of this repertoire had been brought to Australia during the early years of European colonisation. The opportunity to research the topic was presented in the form of the 2019 National Folk Fellowship.

It allowed her full access to the National Library of Australia's music collection, and she spent several weeks digging out the oldest and most interesting examples of Scottish baroque, classical and folk music as played and cherished by European immigrants in Australia.

The stylistic distinctions between these three genres of music are particularly blurred in Scotland where one commonly finds traditional Scottish airs used in chamber and orchestral music.

When it came to recording these works, Shane needed a band of brilliant, versatile performers who could move seamlessly between styles and musical periods, who could play these works as they were intended to be played. And what a band it is, featuring the beautiful voice and harp playing of Claire Patti (The Velvetones), Shane Lestideau and Ben Dollman

(Australian Brandenburg Orchestra) on period violins, Rachel Johnston on cello (formerly of the Australian String Quartet), and Emily-Rose ?árkova (from the genre-blending ensemble Chaika) on piano and piano-accordion.

One Hundred Days Away, is a haunting album focusing on songs and tunes that are linked to the sea, a nostalgia for 'home', or the struggle to settle in unfamiliar lands. Part classical, part folk, part Scottish, part Australian, this album captures the musical and emotional landscape of the early Australian settlement.

Miss Ann Crocker's Waltz / Our Friends Over The Sea

Love Will Find Out The Way

When She Came Ben She Bobbit / Polwart On The Green