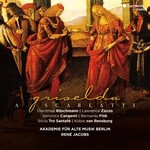 Scarlatti's Griselda, premiered in Rome in 1721, received a single performance at the Teatro Capranica, and was never taken into the repertoire elsewhere, both for financial reasons and because of the changing tastes of the time. The tragic story of King Gualtiero, who makes his wife Griselda, a commoner, undergo cruel trials in order to demonstrate her steadfastness and thus prove to his people that her nobility of virtue far surpasses the nobility of birth they demand, was provided with a classical happy ending by the librettist Apostolo Zeno.

"Dorothea Röschmann is wonderfully elegant as the totally supine and finally rather infuriating heroine, while the American counter-tenor Lawrence Zazzo swaggers and connives convincingly as Gualtiero, a role originally written for a castrato. With the superb Bernarda Fink in the relatively small part of Roberto, Veronica Cangemi as the couple's daughter Costanza and Silvia Tro Santafe appropriately villainous as Ottone, there are no weaknesses elsewhere either, and the playing of the Berlin Akademie für Alte Musik projects the typical Jacobs dramatic charge. Definitely worthwhile, and worth hearing." - the Guardian