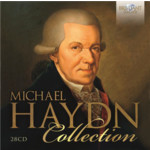 Johann Michael Haydn (1737-1806), younger brother of Joseph, was born in Rohrau Austria, on 14th September 1737. Aged eight, he joined Joseph among the choirboys at St. Stephen's in Vienna, while he studied singing, violin and organ. Aged twenty-five, Michael was appointed court composer and Konzertmeister in Salzburg, having already completed more than a dozen masses, fifteen symphonies and other works. In 1781 he became the organist of Salzburg Cathedral. He stayed the rest of his long and productive life in Salzburg. Although nowadays Michael Haydn is overshadowed by the fame of his brother Joseph, during his lifetime he was highly respected and praised by Leopold and Wolfgang Amadeus Mozart and notably by his brother Joseph, who considered Michael's vocal works even better than his own. This extensive collection of works by Michael Haydn includes a substantial number of symphonies, concertos, chamber music, sacred vocal music and operas. In many works Michael Haydn equals the freshness, wit and lyricism of his famous brother's works, whereas his religious works breath a solemn, intimate and truly pious spirit. A true discovery of a Master of the classical style, an underrated genius deserving far more exposure!

"This is a wonderful set without a single duff disc and one which should win some new friends for Michael Haydn's music. It serves as both an excellent introduction as well as an addition for someone like myself who already has a collection of Haydn's music, as it not only fills some gaps, but also offers superb alternative recordings to those you might already have. All the performances are first rate and are blessed with at least very good recorded sound." Music Web Recommended Feb 2020