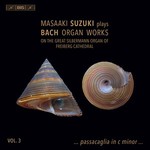 Born within a couple of years of each other, Gottfried Silbermann and Johann Sebastian Bach were acquainted, and we know that Silbermann in 1736 invited the composer to inaugurate the new organ that he had built in Dresden's Frauenkirche. That instrument was destroyed during the bombing of Dresden in 1945, but some thirty of Silbermann's organs are still extant. From robust pedal stops providing a sturdy bass fundament to silvery flute stops, his instruments were famous for their distinctive sound and contemporary sources often made use of a play on the name of their maker as they praised their 'Silberklang'.

Silbermann was based in Freiberg with his workshop only a stone's throw away from the cathedral, where he built his first great organ in 1714. One of the finest and best preserved examples of his art, this is the instrument which Masaaki Suzuki has chosen for the third instalment in his traversal of Bach's organ music, following acclaimed recitals recorded in Groningen (the Netherlands) and Kobe (Japan). The programme takes us through various forms of organ compositions, including one of Bach's most imposing preludes (BWV 546) with its intricate fugue, the multi- sectioned Toccata in C major (BWV 546a), examples of chorale preludes and partitas. Suzuki closes his recital with the famous Passacaglia and Fugue in C minor, probably composed during the same years that Silbermann was busy building the organ on which it is performed here.

"The climax of the disc is certainly the Passacaglia & Fugue, which is perhaps the work which might most attract the casual listener: the organ aficionado will need no enticement for this release other than the knowledge that a masterly Bach interpreter is presiding over a fabulous Bach-era instrument. Suzuki's is a vividly imaginative and wonderfully coherent interpretation, which flows easily through a glorious panoply of vivid organ colours. He combines majesty and wit, strength and subtlety in a performance which is utterly compelling; the icing on the cake of what is a very fine release indeed." MusicWeb Recommended

The Organ At The Sydney Opera House