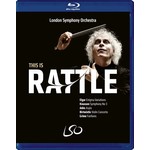 Sir Simon Rattle's arrival in London heralded a new era for the LSO, and the ten day festival that opened his inaugural season as the Orchestra's Music Director wowed critics and audiences alike, going on to win the prestigious Royal Philharmonic Society award in the 'Concert Series & Festivals' category.

This film captures Rattle's very first performance as Music Director; a programme in which British composers took centre-stage. The world-premiere of Helen Grime's Fanfares, which became the first movement of the work Woven Space, opened the concert before violinist Christian Tetzlaff took to the stage to perform the concerto written for him in 2010 by Harrison Birtwistle. Two more works close to Rattle's heart followed: Thomas Adès' Asyla and the pocket-sized Symphony No 3 by the late Oliver Knussen. Finally, Rattle's stunning interpretation of the Enigma Variations brought the concert to a close and then the audience to its feet, filling the Barbican Hall with rapturous applause.