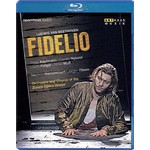 Beethoven's only opera Fidelio never ceases to fascinate audiences with its spellbinding story of true love. Staged by renowned opera director Jürgen Flimm this production is the outstanding result of the teamwork of the orchestra and chorus of the Zurich opera with a cast of magnificent singer-actors. Finnish soprano Camilla Nylund in the title role presents a wonderful portrayal of the opposing characters of the loving wife, Leonore, and her alter ego, the young man Fidelio. Jonas Kaufmann who has lately gained international fame is her counterpart Florestan - the attractive tenor plays a convincing suffering prisoner, brought back to life by marital love. László Polgár is the jailer, torn between greed and sympathy and Alfred Muff takes on the sinister Don Pizarro to complete the setting. Under the musical direction of Nikolaus Harnoncourt, this production became a highly memorable event. The Austrian conductor is universally celebrated for the structural transparency of his interpretations, his intellectual penetration and his emotional understanding of both music and opera plot. He once called this opera "a hymn of praise to marital love". Although the work has a long tradition of being interpreted in political terms portraying oppression and liberation, imprisonment and freedom, Harnoncourt is adamant that, for Beethoven, these topics were only a means to an end: "What he was concerned about is love. The real action is between Leonora and Florestan. Essentially, the work is about what can be achieved by true love and the fact that a loving wife is ready to do anything for her husband."

"[Nylund's] bright soprano is on the right side of heroic while still remaining feminine, the perfect mix for the noble wife disguised as a boy…[Harnoncourt's] interpretation here sees him at his best. The opening chords of the overture bristle with excitement and dramatic tension [and] his dramatic pacing of the big moments feels just right, and the ensembles move with great style" MusicWeb