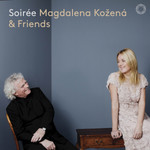 Soirée captures the atmosphere of informal, domestic music making. Czech star mezzo-soprano Magdalena Kožená offers an intimate and highly personal collection of international songs together with an outstanding group of musical friends, including Sir Simon Rattle, who makes his recording debut as a pianist. The German lied is represented by Brahms (Two Songs, Op. 91 and Five Ophelia Songs, WoO 22) and Strauss (Morgen!), the French chanson by Chausson (Chanson perpétuelle) and Ravel (Chansons madécasses), and 20th-century avant-gardism with Stravinsky's Three Songs from William Shakespeare. In between these explorations, Kožená revisits her musical roots with a selection of Dvořák songs, arranged by Duncan Ward, as well as Janáček's Nursery Rhymes.

Soirée is the second release of Magdalena Kožená's exclusive collaboration with PENTATONE, after having presented the baroque cantatas recital album Il giardino dei sospiri in 2019.

"Don't you sometimes long for the days when it was common for people to get together every Sunday, bringing their instruments, and after good food, wine and talk, there would be chamber music just for the sheer pleasure of it? And the alcohol would sometimes make the unplayable more or less possible: or at least it felt so...
Although we seldom had the chance to cook for each other, the relaxed atmosphere of family music was permanently present during these concerts and recording sessions, even though they were completely teetotal! Well nearly, as persuading my colleagues to sing in Czech for the Janáček songs did take a couple of drinks to get off the ground..." - Magdalena Kožená