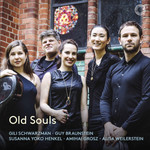 Old Souls presents masterworks of Beethoven, Dvořák, Wolf and Kreisler in new arrangements for flute and strings, played by a group of outstanding young musicians. Guy Braunstein's arrangements display these well-known pieces in a fresh new light, while simultaneously expanding the flute repertoire and showcasing the exceptional possibilities of the instrument, here played by Gili Schwarzman. Braunstein and Schwarzman are joined by violinist Susanna Yoko Henkel, violist Amihai Grosz and cellist Alisa Weilerstein. While the arrangement of Beethoven's Violin Sonata Op. 23 entails a thorough recomposition of the original, the performances of Dvořák's "American" String Quartet, Wolf's "Italian" Serenade and Kreisler's Syncopation stay closer to the source, with the flute taking up the role originally played by the first violin. The use of the flute creates novel sonic sensations through the way it blends with the strings, and at times gives the pieces a sparkle they did not have before.