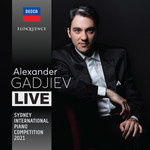 Carrying off the Ernest Hutcheson First Prize but also an additional six prizes at the 2021 Online Edition of the Sydney International Piano Competition, the young Italian-Slovenian pianist was also winner of the 2018 edition of the Prix Ranieri 111: Monte-Carlo Piano Masters (Monte Carlo, Monaco) and, in 2015, First Prize and Audience Award winner at the Hamamatsu International Piano Competition (Hamamatsu, Japan).

More recently, he was selected for the 2019-2021 BBC New Generation Artists Scheme, which provided opportunities for him to perform in many of the major festivals and series in the UK, both in recital and as soloist with the BBC orchestras, and to record regularly for BBC Radio 3. In demand as a soloist with orchestras, and as a recitalist, Gadjiev has also performed in the Salle Gaveau in Paris, the Great Hall of Ljubljana's Philharmonie, La Fenice in Venice and the Tchaikovsky Moscow State Conservatory.

'He seems to have not only extraordinary musical sensitivity and intelligence, but practicality, awareness of promoters' needs, the ability to think from various angles, facility in several languages, and a grasp of history and underlying connections in the world of arts and ideas. He has already made impressive inroads into a busy international concert pianist's career and seems happy in his own musical skin,' commented Piers Lane AO, Artistic Director of the Sydney International Piano Competition. Mark Coughlan, one of the judges at this year's Competition, commented: 'Alexander Gadjiev is a pianist of considerable refinement and an outstanding musical communicator. He maintains an excellent sense of line in lyrical passages, shaping with subtlety and finesse.
Even in the most powerful climaxes his playing never loses its elegance. His Liszt playing swept the audience on an exhilarating musical journey.'

Alexander Gadjiev's repertoire for this CD of 'live' performances ranges from Haydn to Vine, including some exquisite Scriabin, atmospheric Messaien, thrilling Prokofiev - all shaped with sensitivity and elegance.

"Alexander Gadjiev is that rarest of pianists and musicians: he combines virtuosity, control, intelligence, imagination, the ability to communicate with his audience." Jeffrey Swan