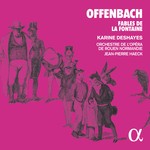 A grasshopper, a milkmaid's pail, a shepherd, a fox, a country mouse, a cobbler... These are just some of the diverse and varied characters from the famous Fables that Jacques Offenbach decided to set to music in 1842, some 150 years after they were written by Jean de La Fontaine. With their vivid texts featuring talking animals and stock characters, the Fables offered an allegorical and didactic way of alluding to the court and the mores of the time. Offenbach chose six of the 240 Fables of la Fontaine to set as mélodies. Here the conductor Jean-Pierre Haeck presents them in his own orchestration performed by the Orchestre de l'Opéra de Rouen and the mezzo-soprano Karine Deshayes, who excels in this repertory. To complete the programme, the singer performs numbers from Offenbach's opéra-bouffe Boule-de-neige and the orchestra plays movements from the ballet Le Papillon, offering listeners a recording as refined as it is witty.