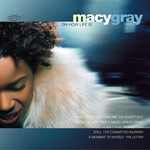 Macy Gray
On How Life Is (LP)

Reaching #4 on the Billboard 200, On How Life Is meant instant success for R&B singer Macy Gray. The hit single "I Try" topped multiple charts, of which the Mainstream US Top 40 was arguably the crown on its achievement. With a contemporary mix of Hip Hop minded Soul, Gray has been a force to be reckoned with ever since.