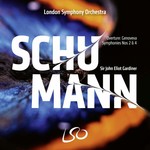 Lean and lithe are two descriptions of John Eliot Gardiner's approach to Robert Schumann's music. Add in atmospheric and dramatic for the Overture to Genoveva (an opera), surging forward but with enough room for lyricism and breathing space, the LSO happily at home accommodating the conductor's 'authentic' approach - incorporating crisp timpani, liberated woodwinds and vibrant horns - with something saved for a thrilling dash to the finishing post.

In choosing the 1841 original score of Symphony 4 JEG gives us something quirky and concise (no marked repeats in the outer movements, for example, which Schumann added in the 1851 revision). Gardiner relishes the music's cut and thrust, its individuality, keeping it alive and on-track (the four movements are tagged, and he makes sure they are, no pause allowed, no impatience either). The chameleon-like LSO is fully-seized of Gardiner's approach - unanimous, dynamic and detailed - and it's good to have a performance that surges along and which is not conscious of Schumann's need for a revision, whether in the twilight slow movement (very expressive) or the emphatic Scherzo, contrasted by a contoured Trio; and then, via a majestic link, a high-kicking Finale that, with the coda reached, speeds along as if bitten by a tarantula.

As for the magnificent C-major Symphony, Gardiner's view might surprise in the gravitas that is spaciously unfolded in the opening Sostenuto assai - music of eloquence and anticipation - yet with a fiery link into the Allegro (exposition repeat observed), for which JEG is also conscious of the ma non troppo qualification, without denuding direction and emotions, although, as the movement develops, there is a tendency for horns and trumpets to lose out to timpani. The Scherzo is given a fleet outing, played nimbly and then some, the first Trio light on its feet, the second not lingered (as it can be), at-one with its surrounds yet without compromising its poetic quotient. The wonderful Adagio has time on its side to glow and confide, and the Finale is a potent release, resolute strides but not a manic tempo, and here crowned by an arriving-at-the-summit conclusion, timpani reined-in a tad, unexpectedly. There are many ways of performing this superb music. John Eliot Gardiner's is but one, Dresden versions from Sawallisch and Thielemann are others.