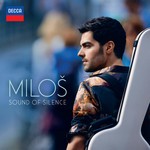 An album of calming and meditative solo guitar works set alongside a selection of pop and jazz hits. Sound Of Silence includes songs by artists stretching from Simon and Garfunkel, Leonard Cohen to Portishead and Nora Jones reimagined in stunning new settings for guitar and other featured instruments.

Miloš' first three releases achieved major successes around the globe and turned him into "classical music's guitar hero" (BBC Music Magazine). His album of classic songs by The Beatles - Blackbird - received unanimous acclaim. However, Miloš was struck by an inexplicable but devastating hand injury when his follow-up album was already in development. Unable to play, he was forced to pull out of multiple engagements and studio dates, with no real sense of when or if he might recover. At the highest point in his career, the multi-award-winning musician reached the lowest point in his life, and it is this that inspired Sound Of Silence.

The album includes classical guitar pieces he played while rebuilding himself from the ground up, as well as varied songs he listened to when he had to rest and escape from it all. Miloš' interpretations of songs like Portishead's 'Sour Times', Radiohead's 'Street Spirit' and Leonard Cohen's 'Famous Blue Raincoat' are featured alongside guitar pieces by Pujol and Tarrega. Saxophonist and friend Jess Gillam joins Miloš for two melancholic duets, as well as hang player, and regular Björk collaborator, Manu Delago on the classic song 'Nights in White Satin'