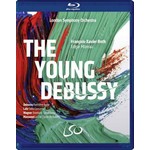 The evocative music of Claude Debussy has been described as the foundation of modern music. But how did the composer come to develop his unique style? One of today's most charismatic conductors, with a reputation for enterprising programming, LSO Principal Guest Conductor François-Xavier Roth presents the UK premiere of a previously lost work by the young Debussy, alongside some of his earliest inspirations.

Debussy's newly-discovered Première Suite gives a rare insight into just that - the mind of a young composer on the cusp of innovation. It's a work filled with Romantic and Eastern influences, with glimpses of the unexpected harmonies that came to define Debussy's work. Paired alongside the composer's role models, from Wagner's powerful intertwining motifs, the abundant Spanish influences in Lalo's rarely-heard Cello Concerto, performed by Edgar Moreau, and Massenet's majestic Le Cid, François-Xavier Roth gives a fresh perspective on the much-loved composer.