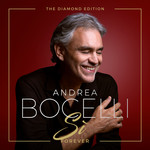 Golden Globe-winning operatic tenor Andrea Bocelli is back with an extended special edition of his best-selling album Si. Featuring two new duets with Ellie Goulding and Jennifer Garner who add to the star-studded line-up on the original album: Ed Sheeran, Dua Lipa and Josh Groban along with Andrea's son Matteo Bocelli.

Also included are three brand new solo tracks from Andrea. The first, 'Alla Gioia', has been recorded to commemorate the 250th anniversary of Ludwig van Beethoven's birth, celebrated around the world throughout 2020. A new recording of 'Ragazzo Mio', based on the traditional Irish tune 'Danny Boy', precedes 'Il Mare Calmo Della Sera', a special 25th anniversary track written by Zucchero Fornaciari, Giampiero Felisatti and Gloria Nuti specially for Andrea. Beginning with his triumph at the famous Sanremo Festival in 1994, the winning track was subsequently released as Andrea's debut studio single and, later, his debut album.