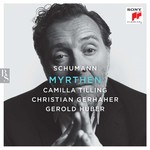 After the success of his critically acclaimed album Frage, the internationally renowned baritone, Christian Gerhaher returns with Myrthen-the second chapter of his project to record all of Schumann's songs.

Schumann devoted his song cycle, Myrthen, to his wife Clara Schumann and gave it to her as a present on their wedding day. This year marks Clara Schumann's 200th anniversary.

Christian Gerhaher has won numerous awards including a Laurence Olivier Award and a Gramophone Award.

Gramophone said of Frage, the first Schumann album in this project "...this is an album to treasure and to savour-and to listen to again and again."