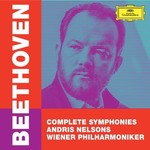 Andris Nelsons has joined forces with the Wiener Philharmoniker recording Ludwig van Beethoven's nine symphonies for Deutsche Grammophon. This release marks the start of the Yellow Label's celebration of the 250th anniversary of Beethoven's birth next year. The Nelsons Beethoven cycle is presented in a specially commissioned deluxe box featuring the nine works on five CDs and a single Blu-ray Audio disc in TrueHD sound quality.

Beethoven has been central to Andris Nelsons' work since he began his career in the early 2000s. The Latvian conductor garnered rave reviews for his 2013-14 Beethoven cycle with the City of Birmingham Symphony Orchestra and scored critical acclaim for more recent Beethoven performances as Music Director of the Boston Symphony Orchestra and Leipzig Gewandhausorchester. In March and April this year he joined the Wiener Philharmoniker, the world's supreme Beethoven orchestra, for a series of concerts including works by the composer in Vienna, Hamburg and Hanover, and for the final recording sessions at the Vienna Musikverein of their complete symphony cycle for Deutsche Grammophon.

"The journey of interpreting Beethoven's symphonies signifies a great opportunity, responsibility and challenge, but in the end, it's not about me, it's purely about the genius and universal quality of Beethoven's music, which speaks to each and every individual," comments Andris Nelsons. "Of course, I need to have a vision, and our task as musicians is to find a fulfilling way of presenting Beethoven's ideas to listeners, but this will always be very subjective and deeply personal."