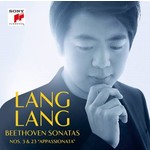 Lang Lang is a critically acclaimed piano virtuoso who began playing the piano at the age of three. He studied at Beijing's Central Conservatory of Music. At the early stages of his career,he won numerous competitions including the Xinghai National Piano Competition and the Fourth International Competition for Young Pianists in Ettlingen, Germany.

Lang Lang has performed with some of the world's highly regarded orchestras including the Moscow Philharmonic Orchestra and the Philadelphia Orchestra. As bonus track it contains the 3rd movement of the "Tempest" sonata.

Beethoven (1770-1827) was a German composer and pianist who is widely regarded as one of the greatest composers of all time. He is one of the most recognisable and influential composers of the Romantic period and his music remains popular around the world today.