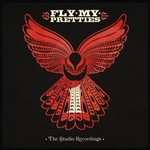 With a rich history as a live act, this album presents some of their most loved tracks in a brand new setting. Fly My Pretties have only ever recorded and released live albums, and in a reverse move, now present their first studio album.

This release sees frontman Barnaby Weir stepping into the Surgery Studios alongside members of the FMP whanau to capture a collection of tracks from their catalogue.

The Studio Recordings Part 1 travels through blues, dub, folk and soul, while maintaining a sound which is uniquely Fly My Pretties.