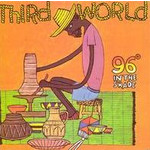 Reissued as part of Island's 60th anniversary celebrations, Third World's 96º In The Shade is one of the seminal reggae albums.

An enormous critical success in the U.K. and Europe on release, 96º In The Shade spawned an all-time classic single in the title track and iconic album artwork from Tony Wright

The album cemented the band as one of the most vital in 1970s reggae alongside fellow Island signing Bob Marley and Black Uhuru.