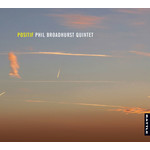 Positif is Phil's fourth album featuring this particular line-up of excellent musicians, but it is the ensemble's first "live" recording. Several of the tunes had been performed as concert material, but all were either written or arranged after the release of Phil's 2016 Jazz Album of the Year release, Panacea.

"This is the fourth album I've recorded with this line-up of very fine musicians. Our previous three albums, the 'Dedication' trilogy, were all recorded at the Kenneth Myers Center in Auckland, so it seemed fitting to use the venue again to record this set of new compositions, only this time with an audience present." - Phil Broadhurst