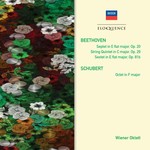 This recording forms part of a series of 10 reissues celebrating the glorious Decca recordings from the 1950s-1970s of the Wiener Oktett (Vienna Octet), made up of key principals from the Wiener Philharmoniker and the Vienna Symphony Orchestra. Five titles were released in September and the remaining five are released this month.

This volume in the Wiener Oktett Decca Legacy includes two staple works in the ensemble's repertoire: the Beethoven Septet (in its 1959 recording and the Schubert Octet (in its 1957 recording). Beethoven was rather miffed when he heard that, of all his works, his divertimento-like Septet was wildly successful in England. This anthology also includes two chamber music rarities by Beethoven - his Op. 29 String Quintet and the Sextet, Op. 81b, which, for its inclusion of the difficult parts for two horns (superbly negotiated by Wolfgang Tomböck and Volker Altmann) has made this recording a collector's item much sought after by horn players. Both, the Quintet and the Sextet make their first international appearance on CD.

'their playing is richly eloquent [in the Beethoven String Quintet] … [the Beethoven Sextet] is impeccably played, unfailingly pleasing … the recordings which are firm and detailed, well-focused and lifelike' Gramophone