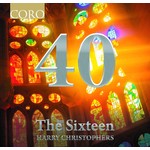 VARIOUS COMPOSERS
40: The Anniversary Collection. Album by The Sixteen
The Sixteen, Harry Christophers

Can it really be 40 years since a fledgling group of singers gave their first concert in May 1979? To celebrate this milestone, we have chosen 40 tracks which have defined this acclaimed ensemble over the last four decades and which display its incredible versatility, as well as the sheer range of music and styles it has covered.

Featuring music from the last 600 years and with personal recommendations from The Sixteen's members both past and present, as well as the longest-serving members of the administrative team, this beautifully packaged album promises to be the must-have collection for all fans of choral music.

'It's the ideal playlist for anyone wanting to sample the possibilities of choral music, wonderfully sung (and in some cases played, with the Orchestra of the Sixteen).' The Guardian

'This generous two-and-a-half-hour, 2 CD set has 40 tracks, one for each year of The Sixteen's lifespan, and drawn from some of their most celebrated recordings... This is best treated as a sampler, not only of what The Sixteen can do, but also what is out there in choral music.' Classic FM, (David Mellor's Album Reviews, 2 May 2019)

'40 favourite recordings from the extensive catalogue. The personally-written introductions to each track are a thoughtful touch.' BBC Music Magazine ★★★★