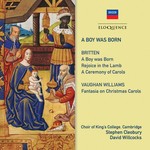 Eighty minutes of Christmas at King's: reference Argo recordings of Britten and Vaughan Williams capturing both the magic and joy of the season as well as the resonant glory of a famous acoustic.

Britten's genius as a choral composer centred around his ability to write rewarding parts for amateurs and young singers; his choice of treasurable texts, set and scored in a way which makes his music seem the only

possible partner for the words; and a technical command which can achieve those perfect settings. All these attributes are evident in the trio of Christmas works on this collection: an early and virtuosic carol symphony, A Boy was Born; and a pair of small masterpieces from the 1940s, A Ceremony of Carols and Rejoice in the Lamb.

Specifically designated for treble voices, the Ceremony finds a natural home in the uniquely atmospheric setting of King's College Chapel. The King's choir has made several recordings though none so consistently

praised as this one, made for Decca and directed in 1990 by Stephen Cleobury, near the beginning of a tenure which only now draws to a close, having affirmed and developed the centuries-old tradition of all-male

liturgical singing with many memorable recordings and broadcasts of the Nine Lessons and Carols Service on Christmas Eve.

This Eloquence reissue is attractively filled out to 80 minutes with a complementary piece and recording from an earlier era of the King's tradition: the Fantasia on Christmas Carols by Vaughan Williams, directed by Sir David Willcocks and recorded in 1962 as part of the choir's collection for Argo entitled 'On Christmas Night'.

While the Fantasia is often heard in full-orchestral garb, the version for strings and organ used here is arguably more effective, and certainly ideal for a chapel choir recording in the English tradition.

'For multitudes of listeners… these performances… have become the representative interpretations… reproduced here in vibrant if occasionally saturated sonics.' Classics Today (Britten)

'Refined, beautifully controlled readings… very apt coupling.' Penguin Guide (Britten) 'Willcocks's opening tempo is spot on, and the dark hues of the choral accompaniment (always in excellent tune) have a persuasive significance... there is an impression of flamboyance in the larger chemistry of the choir's exquisite intonation and ensemble, the fervour of Hervey Alan's delivery, the spacious acoustic and the warmth of the LSO strings.' Gramophone, December 2018 (Vaughan Williams)