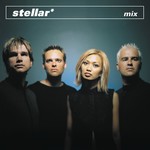 stellar* first burst on the scene 20 years ago - smashing out five radio hits in 18 months - 'Violent', 'What You Do (Bastard)', 'Undone', 'Every Girl', and 'Part of Me' - all reflecting the unique blend of rock and electronica on 1999's Mix album.

Since reforming in late 2017 to perform Maxine at the NZ Music Awards as a tribute to Hall of Fame inductee Sharon O'Neill, the band has toured the country, played major festival dates and been in demand with radio and TV appearances.