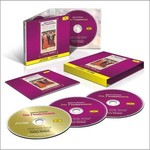 Carlos Kleiber's account of "Die Fledermaus" from 1975 is a highlight of his discography. Inspired by a legendary and incredibly successful staging at Munich's State Opera, where Kleiber conducted almost all Fledermaus live performances until 1988, this studio recording in Munich's Herkulessaal (a concert hall highly familiar to DG's engineers) presents a lively stage atmosphere unlike any other recording. Kleiber also directs a first-class cast with Júlia Várady, an outstanding Lucia Popp, Hermann Prey, René Kollo and Bernd Weikl and an incredibly flexible orchestral sound.

"Twenty-five years after its original release there's still no recording of Die Fledermaus that, for many collectors, matches this one for the compelling freshness of its conductor's interpretation - the attention to every nuance of the score and the ability to bring out some new detail, all allied to extreme precision of vocal and instrumental ensemble." GRAMOPHONE, 2010