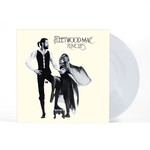 Limited edition clear vinyl version of the iconic 1977 "Rumours", considered by many to be among the greatest albums of all time.

It won the Grammy® for Album of the Year and has sold more than 40 million copies worldwide. Its unforgettable tracks include "Go Your Own Way", "Gold Dust Woman" and the band's first number one smash, "Dreams."

SIDE B:
The Chain
You Make Loving Fun
I Don't Want to Know
Oh Daddy
Gold Dust Woman