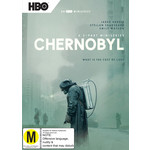 Based on powerful real-life events, 'Chernobyl' dramatizes the story of one of the worst man-made catastrophes in history, the Ukraine nuclear plant disaster of April 1986. This five-part miniseries recounts the remarkable stories of the heroes who fought and fell to save Europe from an unimaginable disaster. Jared Harris portrays Valery Legasov, the Soviet scientist chosen by the Kremlin to investigate the accident to reveal how and why it happened. 'Chernobyl' tells a tale of lies and cowardice, of courage and conviction, and of human failure and human nobility.