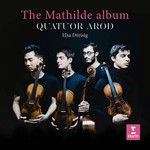 With this album of works by Schoenberg, Zemlinsky and Webern - key figures in Vienna's musical life in the early 20th century - the Quatuor Arod honours the woman who became Arnold Schoenberg's wife in 1901. Mathilde was Zemlinsky's sister and the dedicatee of her husband's String Quartet No 2, an innovative work in both its tonal language and its integration of a soprano - here Elsa Dreisig. It was completed in the summer of 1908, a tumultuous period in the Schoenbergs' marriage

"On this occasion the limelight is stolen from Schoenberg by Zemlinsky...This music requires little excuse to become overheated, and it is much to the Arod's credit that they resist the temptation to press the bow into the string until really decisive moments...The coupling is as unique as it is insightful, and comparisons would seem beside the point: it's an outstanding album." Gramophone Editor's Choice November 2019