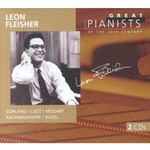 In the 1950s, Fleisher signed an exclusive recording contract with Columbia Masterworks. He is particularly well known for his interpretations of the piano concerti of Brahms and Beethoven, which he recorded with George Szell and the Cleveland Orchestra. They also recorded Mozart's Piano Concerto No. 25, the Grieg and Schumann piano concertos, Franck's Symphonic Variations, and Rachmaninoff's Rhapsody on a Theme of Paganini.

In 1964, Fleisher lost the use of his right hand, due to a condition that was eventually diagnosed as focal dystonia. Fleisher commenced performing and recording the left-handed repertoire while searching for a cure for his condition. In addition, he undertook conducting during this time, serving at one time as Music Director of the Annapolis Symphony Orchestra in Maryland. In the 1990s, Fleisher was able to ameliorate his focal dystonia symptoms after experimental botox injections to the point where he could play with both hands again.

GREAT PIANISTS OF THE 20TH CENTURY is a celebration of great artistry; it is also the result of extensive and careful research on the part of all who have participated in its creation. We trust that it will bring joy as well as enlightenment to generations of music lovers to come in the new millennium.

LISZT:
Piano Sonata In B Minor

RACHMANINOV:
Rhapsody On A Theme By Paganini, Op.43