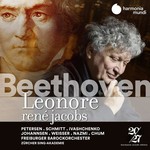 From Leonore (1805) to Fidelio (1814), there were three successive versions of Beethoven's opera, only the last of which has been in the repertory since the 19th century. Going against tradition, René Jacobs has chosen to revive the earliest version, reworking the librettos and the spoken dialogue: a genuine tour de force, this still unknown Leonore forms an incomparable musical and dramatic structure requiring exemplary mastery on the part of both orchestra and singers. This landmark recording proves its case in every respect!

"René Jacobs helps his case significantly by using brisk tempi that move the proceedings along without ever making it feel rushed. His cast is quite strong. In particular, Robin Johannsen successfully portrays Marzelline as charming instead of her usual depiction as a dunce. Likewise, Dimitry Ivashchenko as Rocco gives fine depth to a character usually treated as a rustic bumpkin." MusicWeb