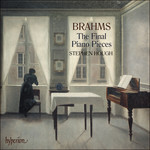 "Hough's real specialities are the pinnacles of the repertoire: the kind of stuff once described as 'music almost too good to be played'. Brahms's final piano works, 20 in all, composed from 1890-92, were regarded by the composer as his swansong. These exquisite miniatures, lasting between two and five minutes each, cover a huge variety of moods, and are often astonishingly passionate and melodic. Typically, on Hough's new CD of them, everything is newly thought out. I have known this music since I discovered the recordings of the American pianist Julius Katchen almost 50 years ago. Listening to Hough, I was constantly delighted by the freshness of his phrasing, so different from many of his colleagues, yet never just for the sake of it. Few make the case for these elusive masterpieces as well as Hough. This music plainly means a lot to him. In a sleeve note he concludes: 'In Brahms, as the nineteenth century and his life begin to close down, the bearded pianist sits at the piano alone. These short masterpieces are some release, some exploration, some passing of time as the light fades and the final cigar is extinguished.'" The Mail On Sunday Five Stars

'One of the finest accounts of Brahms's late piano works on record, one that stands head and shoulders above most contenders in an ever-growing catalogue … in his natural, unmannered freedom, Hough can be ranged alongside Radu Lupu … both join hands with the treasurable few Brahms recordings that have survived from Ilona Eibenschütz, friend of the composer who gave the private premieres of Op 118 and Op 119' Gramophone Awards 2020 Short List - Instrumental

'He's really made me reassess this music I thought I knew so well; nothing is taken for granted … Hough takes Brahms at his word with his tempo indications … there are ravishingly beautiful lullabies interrupted by outbursts of volcanic emotion, soulful introspection twisting into agonizing torment, and Hough's playing melts into the recorded acoustic … I think, end-to-end, this is some of the most refreshing, surprising and emotionally fulfilling late Brahms I've heard in a modern piano recording … a New Year treat that will still, I think, be in some of the 'best of the year' lists in December' (BBC Record Review)

'Being Stephen Hough, he is playing with immense sensitivity, weighting phrasings and dynamics just so, never pushing too hard or too soft, always maintaining the intimate tone that Brahms's private, sad musings need … thanks to composer and interpreter, this is never just a recital of beautiful music; it also offers precious consolation' (The Times)