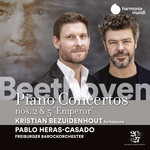 Beethoven's five piano concertos relate, in a sense, part of the composer's life: some twenty years during which a young musician from Bonn made several revised versions of the first concerto he wrote (a springboard to Viennese success that ended up being called no.2), before becoming the familiar 'Emperor' of music embodied by the brilliant inspiration of no.5. Two hundred and fifty years after his birth, it is with these two extremes that Kristian Bezuidenhout, Pablo Heras-Casado and the Freiburger Barockorchester have chosen to start an exciting period-instrument trilogy of the concertos that is bound to be a landmark.

"One of the choicest offerings thus far this celebratory Beethoven year...Bezuidenhout has a long, fruitful relationship with Freiburg...Add to the mix the lively imagination of Heras-Casado, the Freiburgers playing their hearts out, plus expert sound as clean as you're likely to come across in 2020, and you have the makings of a hot recording." Gramophone

"[Bezuidenhout's] performance of the Emperor concerto is scintillatingly dramatic, heroic, deftly articulated and, above all, fresh; and the instrument he plays seems to possess plenty of power. The Second Concerto is given equally enticingly...both readings are enhanced by the brilliantly coloured playing of the Freiburgers under Pablo Heras-Casado." Sunday Times

"[Bezuidenhout] and Heras-Casado have thought deeply about how best to make these pieces sing. He plays on a copy of an 1824 Conrad Graf fortepiano, which sounds both perky and soft-edged, with a slight woodiness allied to an almost bell-like clarity...The orchestra can be almost boisterous, but the piano tempers it with a raised eyebrow, or with its sheer charm...But what marks this recording out is the way they make the music dance - as if no one is watching" The Guardian