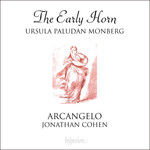 The Mozarts - father Leopold and son Wolfgang Amadeus - bookend a virtuosic recital from Ursula Paludan Monberg, who traces the development of the natural horn as a solo instrument throughout the eighteenth century.

The hunting horn evolved in the seventeenth century as an accessory to a popular leisure activity for the aristocracy - the hunt. Its purpose during the chase was to signal unfolding events to people walking behind the mounted huntsmen; it was designed to be loud enough to project over considerable distance and over the barking of hunting hounds. From this rustic beginning, the horn underwent a remarkable process of taming and refinement over a few decades to become capable of being the featured musical instrument of chamber works in the eighteenth century, such as those recorded here. The music may still retain occasional references to its outdoor heritage in brief fanfares and hunting rhythms, but horn players achieved an ability to blend and balance with small groups of string instruments, harpsichord and woodwinds, with an emphasis on sweetness of tone, phrasing and articulation that would have been unanticipated a generation or so earlier. Not only was this a new sound-world for audiences of the eighteenth century, but it is now one that has become almost entirely neglected in the onward march of popular classical music, making this collection of works a pleasant reminder of the genre.

'A highly enjoyable performance on period instruments with hand-stopped natural horn played by Ursula Paludan Monberg, with members of Arcangelo directed by Jonathan Cohen. If you haven't heard Monberg's name before you've almost certainly heard her playing as principal horn for various ensembles, from Concerto Copenhagen to the Orchestra of the Age of Enlightenment and the English Concert. Her control of pitch and phrasing is wonderful throughout and the intimate recording makes sure we don't miss a thing' (BBC Record Review)

"The Danish horn player Ursula Paludan Monberg, thoroughly in command of her instrument, produces a miraculously smooth and agile line with secure tuning…the continuo section of Arcangelo, led by Jonathan Cohen's harpsichord, provides firm support. The recording convincingly places the listener in the room with the players, tying the notoriously elusive horn to a precise spot on the soundstage." BBC Music Magazine May 2020 Chamber Choice

"Early examples of the horn in a concertante role, expertly delivered by a leading exponent of the natural horn" MusicWeb