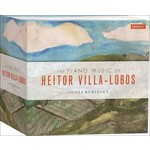 "It's not for nothing that one of Heitor Villa-Lobos' most ardent and significant champions-and friends as well-was the great pianist Arthur Rubinstein. In the vast teeming Amazonian jungle of Villa-Lobos' output (1,500 works-plus), there is a whopping amount of piano music and a startling percentage of it is charming, winning and even first-rate. His 1926 "Rudepoema," for instance, ("rough poem," roughly translated) was written with Rubinstein in mind. The composer wrote him, "I have imprinted a picture of your personality on my memory…you will always seem the true author of the work." Rubinstein never recorded it, but it is a passionate keyboard showcase. Among the more stinging knocks ever levied by one composer on another was Stravinsky's mock-question, "Why is it whenever I hear a piece of music I don't like, it's always by Villa-Lobos?" Behind his snide joke was a truly fundamental difference of temperament and background. Villa-Lobos virtually began as a street musician, and Stravinsky was virtually destined to be an earth-shattering modernist out of the womb. Rubinsky steadily traversed Villa-Lobos' output on disc for more than a decade and a half, and this box set collecting it is nothing if not distinguished." Jeff Simon, The Buffalo News