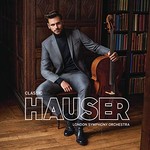 Hauser, the dynamic young cellist who rocketed to fame as half of the genre-busting worldwide musical sensation 2Cellos, re-releases his first solo album, now with a DVD.

This stunning album includes beautiful performances of some of the most iconic classical works including Tchaikovsky's masterpiece 'Swan Lake', Puccini's incredibly emotional aria 'Nessun Dorma' and Barber's remarkable 'Adagio for Strings'. The video disc contains a specially-edited visual program comprised of all three of the Alone, Together solo performances that were filmed earlier this year at Croatia's Arena Pula, Krka Waterfalls National Park, and the historic old town of Dubrovnik. Captured at some of the Balkan country's most stunning locations, the longform performance features HAUSER's renditions of classic compositions, as well as popular themes from film and television - including Albinoni's Adagio, Song from a Secret Garden, and fittingly, Game of Thrones, which given that much of the television program was filmed within the medieval walls of Dubrovnik's old town, was an obvious choice for inclusion. HAUSER began playing the cello at the age of 8. His remarkable talent led him to study at conservatoires in London, Manchester and Boston. Upon graduation in 2011, HAUSER joined fellow cellist Luka Šulić to become 2CELLOS, creating a viral cello version of Michael Jackson's "Smooth Criminal," which catapulted the duo's global success. The meteoric rise of 2CELLOS led HAUSER and Šulić to join Sir Elton John on tour globally and release five successful albums, as well as sell out arena dates around the world. Specialist marketing activity.

DVD:
Alone, Together - From Croatia
1. Now we are free
2. River flows in you
3. Caruso
4. Swan Lake
5. May It Be
6. Air on a G string
7. Song from a Secret Garden
8. Love theme from The Godfather
9. The Nutcracker Suite
10. Pirates of the Caribbean
11. Rachmaninov Second Piano Concerto
12. Albinoni Adagio
13. Intermezzo from Cavalleria Rusticana
14. The Lonely Shepherd
15. Nessun Dorma
16. Game of Thrones - Main theme