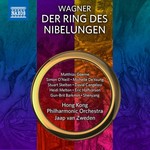 Wagner's visionary Der Ring des Nibelungen was first performed as a cycle of four operas in 1876. One of the most sustained and remarkable achievements in all music, the tetralogy is performed by an all-star cast, conducted by the new music director of the New York Philharmonic Orchestra, Jaap van Zweden, in performances that have been critically acclaimed worldwide for their 'thrilling sense of drama' (The Sunday Times).