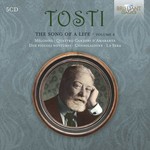 This is the 4th and last instalment of a huge enterprise, a world premiere: the recording of the complete songs by Tosti!

Paolo Tosti (1846-1916) worked in poverty as a music teacher till he met the influential composer Giovanni Sgambati, who became his mentor. He introduced Tosti to Princess Margherita of Savoy, who became later Queen of Italy. She was impressed by him and appointed him as royal music teacher. In 1875 Tosti went to London where his fame spread, and he was made Singing Master of the Royal family.

He is known for his vast quantity of light, expressive songs, characterised by natural, singable melodies of a charming and sweet sentiment. They became immensely popular and Tosti made a fortune with them.

"this is a great tribute to the legacy of the greatest composer of Italian songs. Not all the singing has been on the level the songs deserve but it is an invaluable treat to have them collected - I doubt there will ever be a similar project again - and at Brilliant Classics's give-away price no one needs hesitate to acquire it. Producers, researchers, singers and accompanists can feel proud of the result." MusicWeb