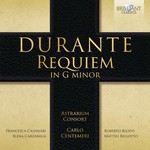 Francesco Durante (1684-1755) was the most important representative of the Neapolitan School in the first half of the 18-th century, "the greatest harmonist in Italy, that is the world" wrote Jean-Jacques Rousseau in his Dictionnaire de Musique. His pupils include Pergolesi, Jommelli and Paisiello.

Durante was one of the foremost composers of sacred music in his time. This new recording presents his magnificent Requiem in G minor, one of the greatest of the Baroque era. The work uses the principles of Renaissance and Baroque polyphony in its complex counterpoint made up of canons, fugues, notation with long values, use of the "Cantus firmus" and rhetorical elements (the descending chromatism) in a style that has a direct reference to the Palestrina style.

The Italian Astrarium Consort is specialized in the exploration of Neapolitan Baroque music. They play on period instruments and have based their performance on a critical survey of the original manuscript scores.