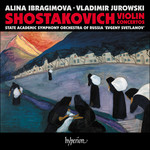 The prospect of hearing Alina Ibragimova in two of the most important concertos written for the violin is in itself irresistibly enticing, but Shostakovich aficionados will also welcome an opportunity to hear the rarely performed original opening to the Burlesque of No 1, subsequently made less fearsome for the soloist at the request of the work's dedicatee, David Oistrakh.

"Ibragimova is the latest to make you think you've never heard [the First Concerto] played better, and her intense relationship with Vladimir Jurowski and the current incarnation of Yevgeny Svetlanov's 'orchestra with a voice', making just as compelling a case for the sequel concerto, is supernaturally fine-tuned…Above all it's the massive cadenza where Ibragimova goes to the limits, not afraid of making ugly and terrifying sounds." Five Stars Recording of the Month
BBC Music Magazine July 2020

"In this first recording of the original version Ibragimova digs deep into her expressive strings, aided by Jurowski's Moscow band. She makes as strong a case for the C sharp minor Concerto, both searching and revelling in the music's black wit." Sunday Times

"In every way, these accounts of two great Shostakovich concertos share in supplying a new library choice with those of Oistrakh and Vengerov. They are indeed a cause for celebration. Hyperion contributes its customary classy product with an attractive booklet cover" MusicWeb Recommended July 2020

"If there's one factor above all that sets these performances apart it's the osmosis between soloist and conductor. There's a musical and intellectual friction going on here and it has to do with the balance between head and heart...Ibragimova's playing has an unvarnished truth about it. It's the kind of playing that looks you unblinkingly in the eye and tells it like it is. She's not afraid to 'invade your space' or apply pressure to the sound until its rawness is almost unbearable." Editor's Choice Gramophone July 2020