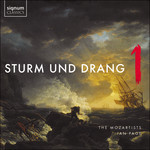 This recording is the first in a projected seven-volume series exploring the so-called 'Sturm und Drang' movement which swept through music, and other art forms, between the early 1760s and the early 1780s. In its strictest sense this was an exclusively literary movement which developed in Germany during the 1770s, and which owes its name to the title of a play written in 1776 by Maximilian Klinger. Its general objectives were to frighten and perturb through the use of a wildly subjective and emotional means of expression, and, taking as its model the recently revived and revered plays of Shakespeare, the movement sought to evoke ground-breaking extremes of passion and sentimentality. A leading figure was the young Goethe, whose Sorrows of the Young Werther (1774) anticipated the sombre world-weariness of the next century's young Romantics, and the movement is generally considered to have reached its peak with Schiller's play Die Räuber (1780-81).

"Page's projects with The Mozartists are distinguished not only by exemplary standards of performance but also by the ambition and imagination that underpin them…[Skerath] is suitably dramatic in first recordings of arias from operas by Jommelli and Traetta…What horns (Gavin Edwards and Nick Benz), and with what freedom they are encouraged to make their mark!...The playing throughout is excellent and the programme is as deeply satisfying as the project's entire conception" Gramophone Editor's Choice May 2020

"This music from the turbulent 1760s - the first part of a seven-disc project, performed with great brilliance - is a startling ear-opener...it's composers ignored in most textbooks - Tommaso Traetta (a ferociously dramatic recitative from his opera Sofonisba) and Franz Beck(a remarkable G minor symphony) - who really make you sit up" The Sunday Times