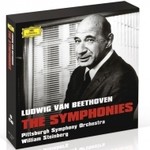 In 1952, William Steinberg and the Pittsburgh Symphony Orchestra embarked on a Beethoven symphony cycle which utilized the new and sonically advantageous process of recording on 35mm film, which was supervised by engineer Bob Fine (who would soon introduce the sonic-standard-setting 'Living Presence' recordings for Mercury). Steinberg's unique approach to Beethoven was warmly received by critics who praised the conductor for allowing the works to speak entirely for themselves.