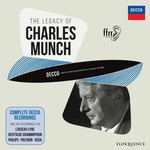 "Munch's second recording of Berlioz's setting of the Requiem Mass resonates to a vision recognising that the devil is in the quiet detail, and that (paradoxically) intimacy triumphs." BBC Music [Berlioz Requiem]

"He introduces elements of rubato into the music, so necessary to preserving its French spirit..the Munch version, recorded with the New Philharmonia Orchestra in December 1965 for Decca-London's "Phase 4 Stereo" series (high-definition audio quality of its time), has extra zing...so it's just frou-frou music. So what? The way Munch tears into it, it may as well be the Beethoven "Eroica." So just relax, put your musical acumen on hold for a while, and enjoy." ArtMusicLounge [Gaite Parisienne]

Ravel: Piano Concerto in D major (for the left hand)