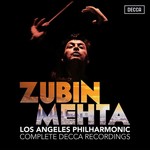 In October 1954, the eighteen-year old Zubin Mehta boarded a ship for Italy and upon disembarking there took a train to Vienna to pursue his life's ambition in music. Quickly imbibed in Viennese musical life, he almost immediately met Decca's legendary producer John Culshaw who recognising his potential wished to sign him - a contract that would not come to pass until years later.

This 38-CD collection provides proof of just how catholic Mehta's tastes were. The foundation of his music making continues to lie in the central European masterworks (represented here by Haydn, Beethoven, Mahler and Tchaikovsky) and he has never lost sight of that tradition. When he recorded the Mahler Third in LA, the Penguin Guide described it as 'a performance so authentically Viennese'.

The set includes some of Mehta's signature works: Richard Strauss's tone poems and Mahler symphonies and he delivers a compelling sweaty account of Scriabin Poem of Ecstasy, a tremendous performance of Nielsen's Fourth and music by Kraft, and topically, John Williams, the coupling of whose Star Wars and Close Encounters suites were demonstration records for their time and remain so today.