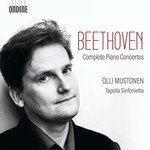 "Ondine celebrates Beethoven's 250th anniversary of birth by re-issuing Olli Mustonen's Beethoven cycle with the Tapiola Sinfonietta. The three volumes were originally released in three separate volumes in 2007-9 as ODE 1099-5, ODE 1123-5, and ODE 1146-5. • Mustonen, described by The Sunday Times as "living dream of pianism", is known for delivering fresh and visionary approach to standard works - this is evident in these masterful recordings of Beethoven's concertos. Mustonen is a particularly fitting exponent for Beethoven's music as the composer himself was also both visionary and revolutionary in his approach to tradition. The recording of Piano Concerto No. 1 includes Mustonen's own candenzas. Beethoven's own Piano Concerto arrangement of his Violin Concerto is also featured - one of Mustonen's signature pieces."

"Mustonen plays Beethoven's Piano Concerto No 3 with a spiky, red-hot touch, fiery with poetic anger, running silky trills straight into dazzling scales and letting fly with accents in unaccustomed places like an orator emphasising prepositions for rhetorical effect. It is a thrilling listen." The Times (No 3)

"...Olli Mustonen displays consummate skill in these renderings of the 4th and 5th Concertos - especially impressive...Mustonen brings great energy to his performances, particularly the more rumbustious opening movement of the lengthy 5th, whose colossal aspect clearly offers no obstacles to his abilities." The Independent [Nos 4 & 5]

"Whatever the ultimate judgement on Mustonen's interpretations, one cannot deny either the brilliance or imagination of his playing, or the consistency of his approach" Gramophone (Nos 1 & 2)